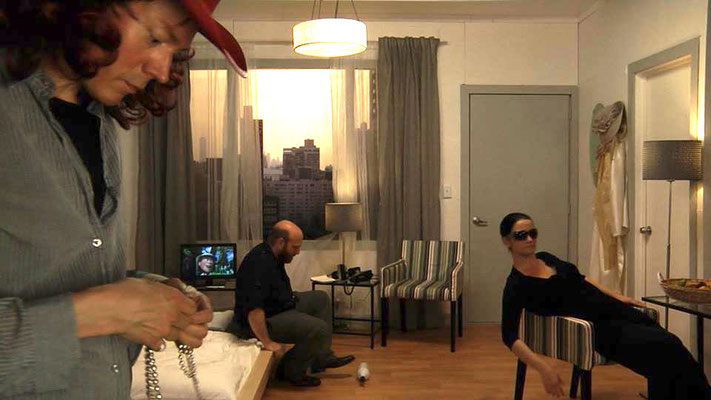 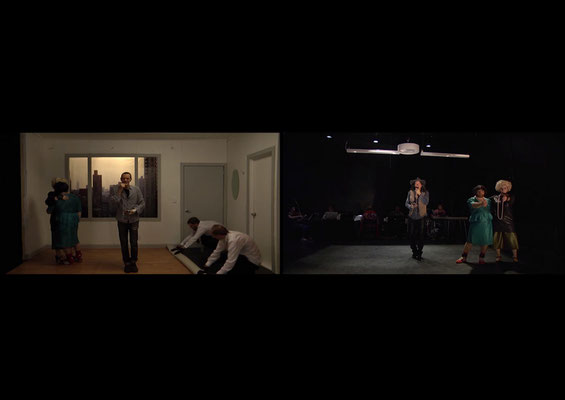 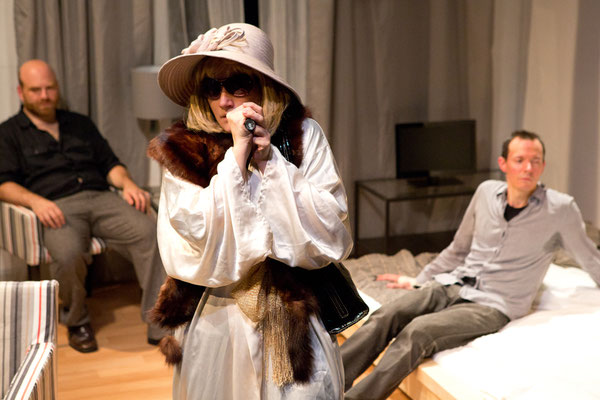 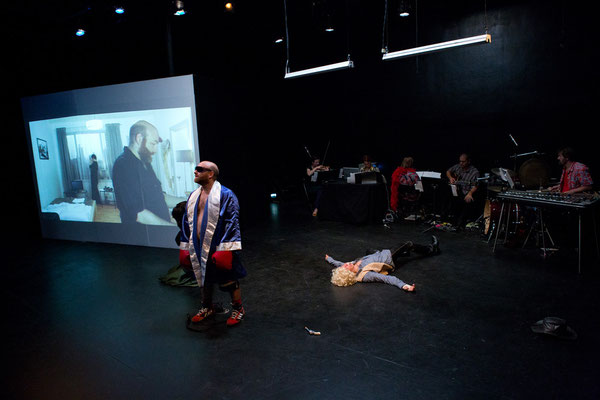 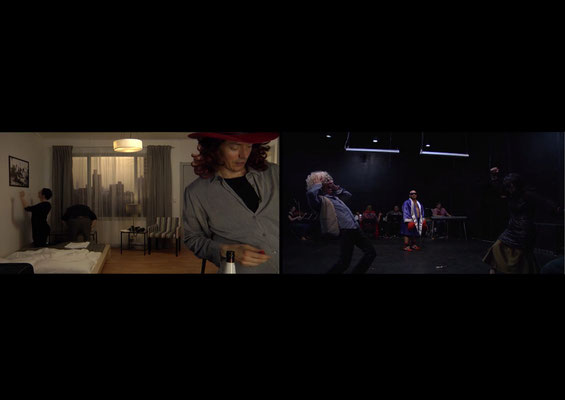 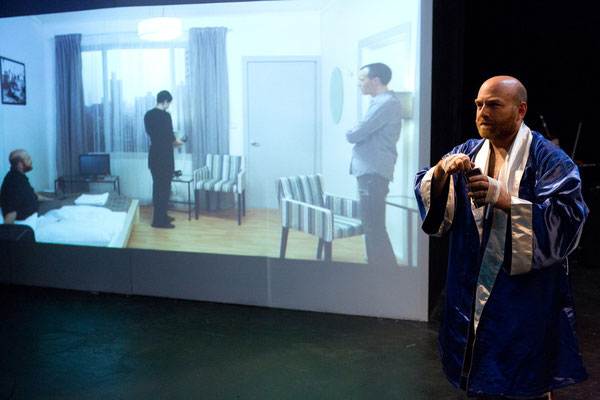 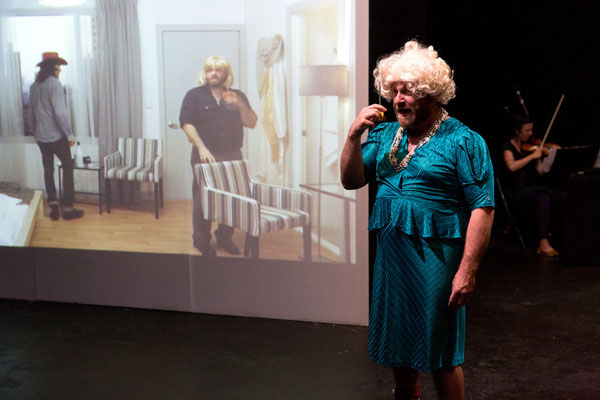 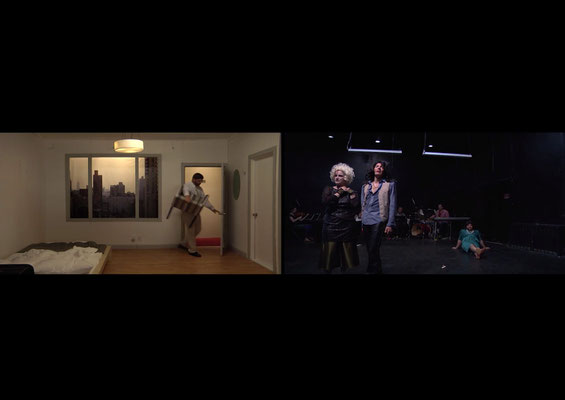 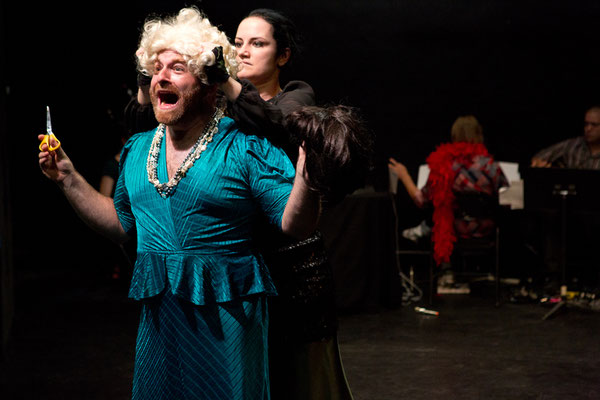 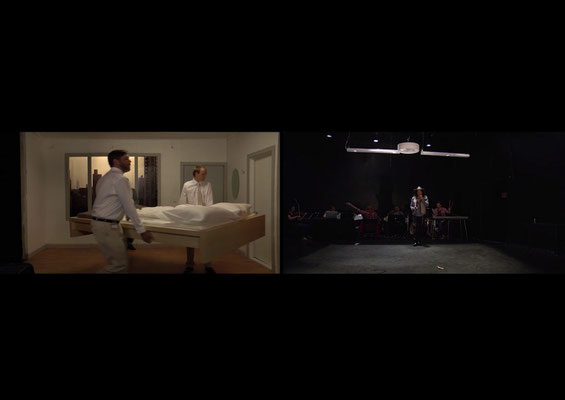 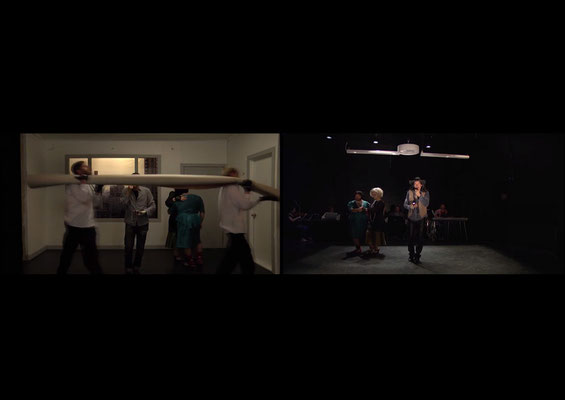 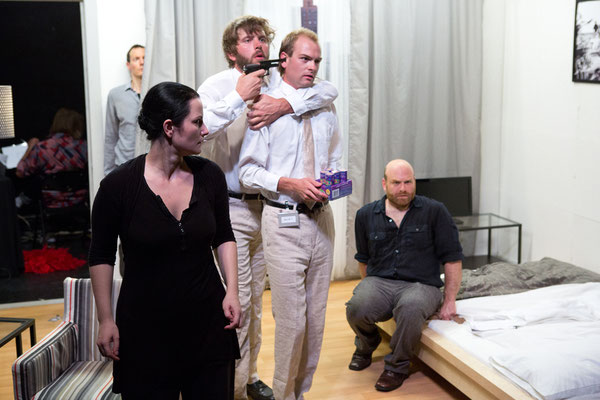 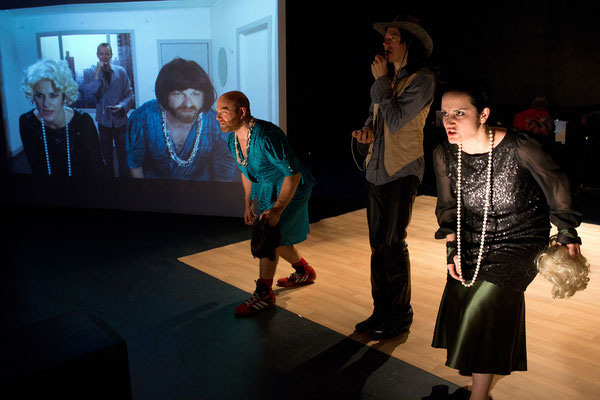 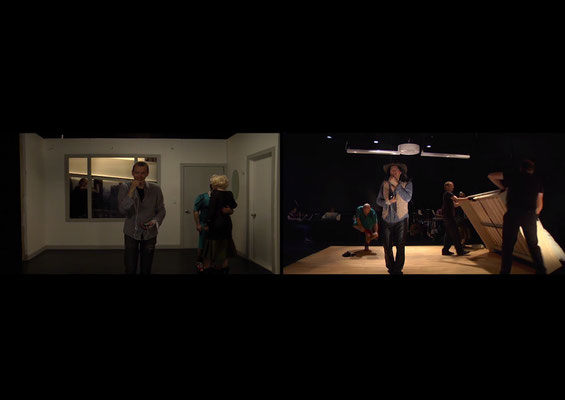 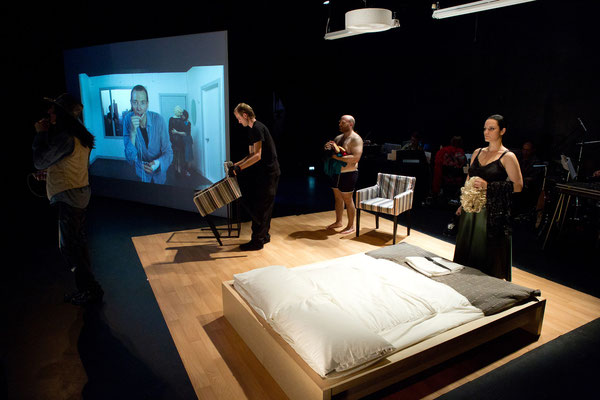 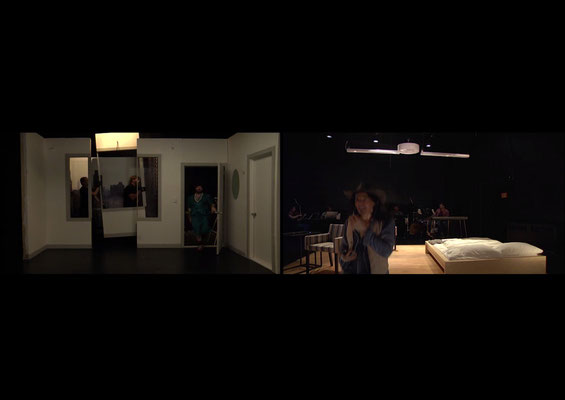 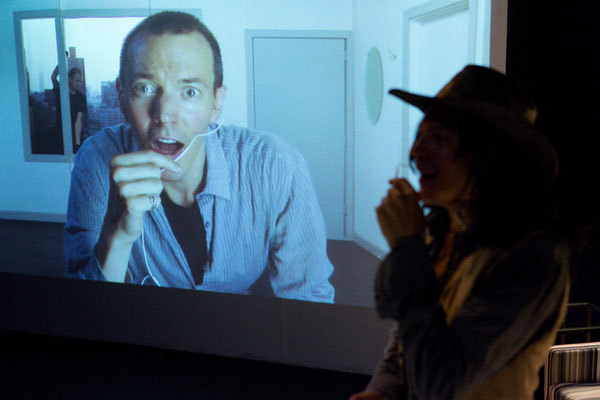 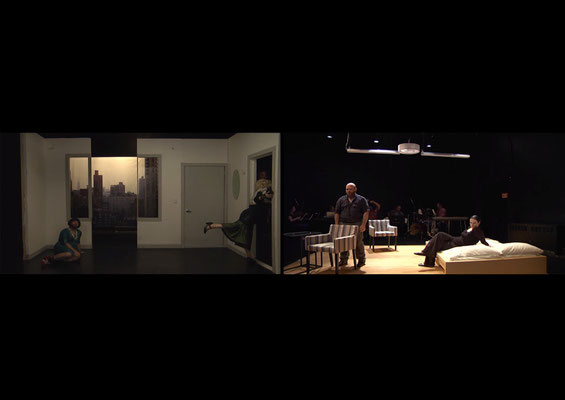 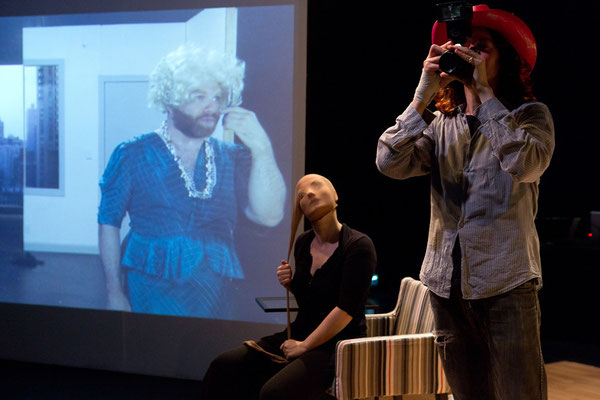 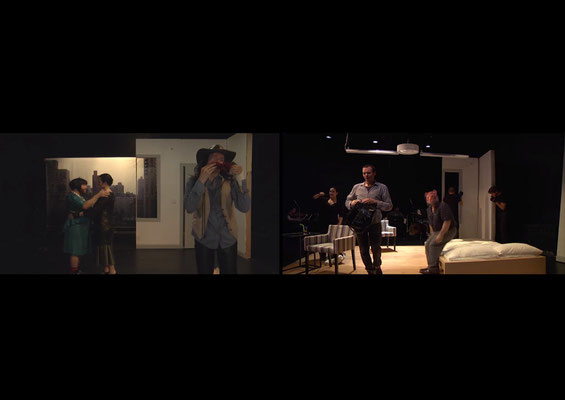 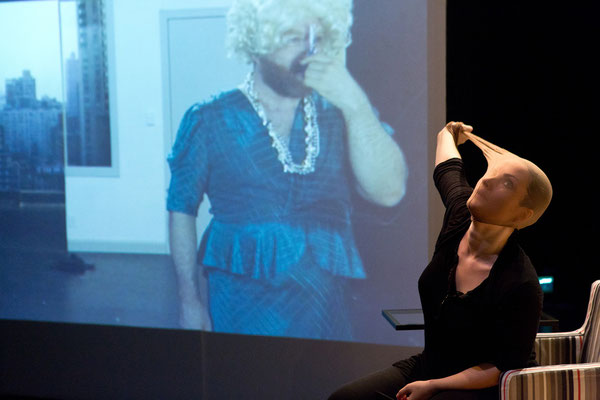 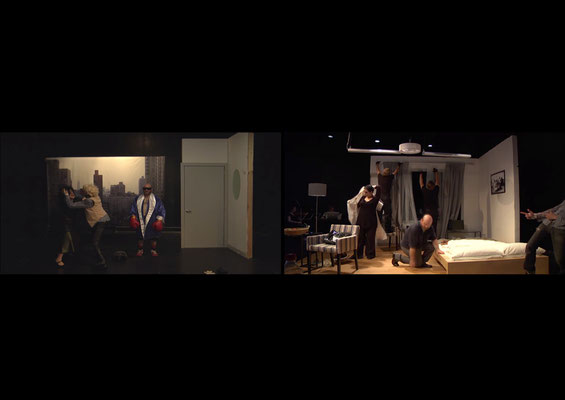 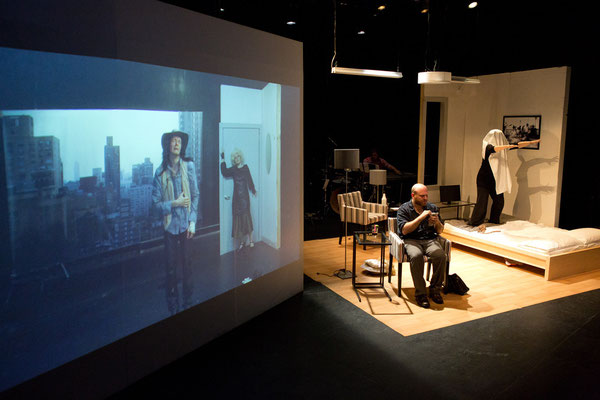 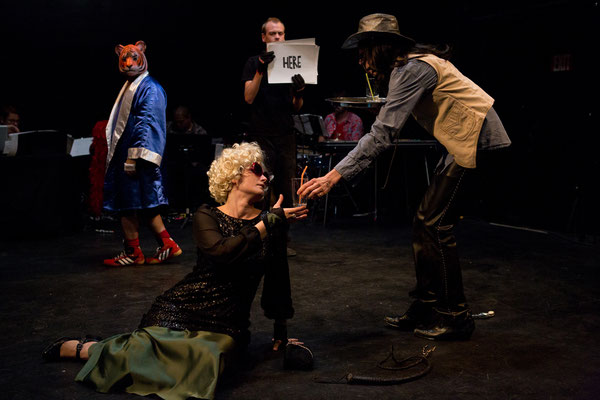 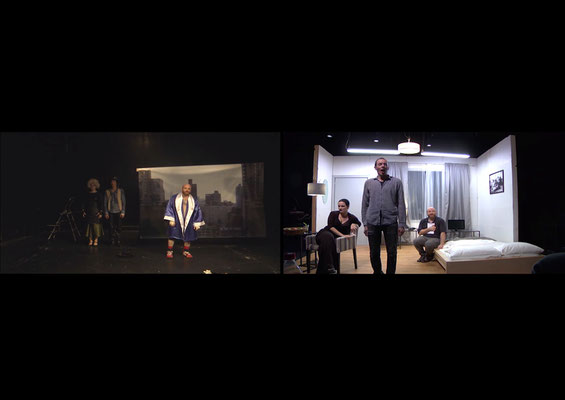 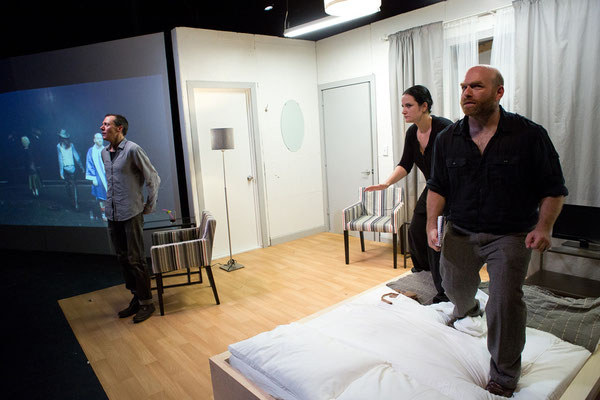 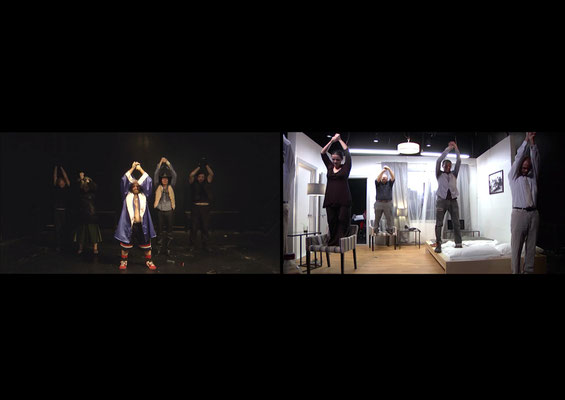 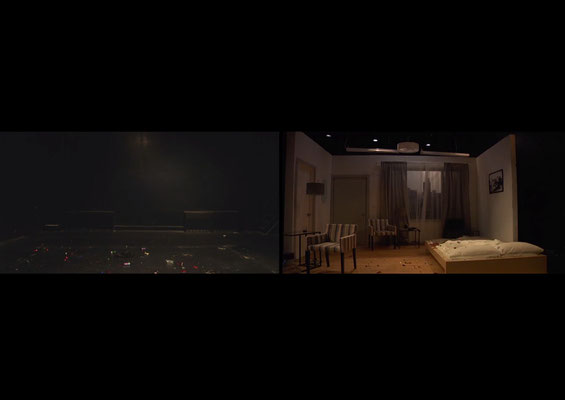 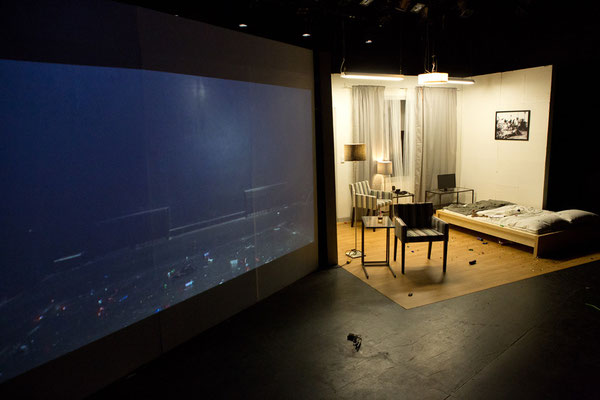 No Hotel is an opera about hotels, films, and bad behavior. The piece channels the split-screen experience of Warhol's "Chelsea Girls" - a pre-produced film runs side-by-side with the live performance. The script from one is performed in reverse in the other.

Accompanied by a live ensemble, No Hotel is an opera unlike any other: part theater, part film, part aggressive noise, part delicate chamber music. Radical, funny, and fierce, "I hope this is the future," -Robert Ashley.

"We start with the idea of a hotel being like a theater and a theater like a hotel. Hotels and theaters have various things in common. They are both places where life is simulated but also suspended. Nothing real happens in hotels and also nothing real happens in theaters and yet in both locations life looks like it is (or appears to be) taking place.
But you aren’t expected to go about your daily business such as taking out the trash or cleaning up your laundry or making your bed or even speaking to your neighbor. You can come and go unhindered by responsibilities and expectations. You can witness a vision of the world from the protective coating of a glass façade or an anonymous uncomfortable folding chair. What happens in the hotel or the theater stays in the hotel or theater, and things can happen there that have no effect on the normal transactions of your daily routine.
The glass façade of a hotel where you can see everything that happens inside the hotel from the outside and where you can see everything that happens outside the hotel from the inside is like a little theater stage where a visual exchange is made between observers. The hotel occupants put on a show for the passers-by and vice versa. The floor-to-ceiling windows allow occupants to have a full floor-to-ceiling view of the city outside without forcing them to venture out into it. The hotel room is a safe zone of maximum visibility. Which brings us to the second thing that hotels and theaters have in common: they both function as a benign interface for the visual exchange between people
So theater audiences are like passers-by and hotel occupants are like actors. But inversely theater audiences are like hotel occupants and actors are like passers-by watching you as you watch them from your secure vantage point. And everyone is a tourist. If only the uncomfortable chairs could be transformed into beds. If only the clean laundry never stopped. If only the walls were made of glass. If only we didn’t need to leave this room, which we don’t. If only this theater and that hotel room could dissolve into each other which they do."

"“No Hotel,” the new opera by the multidisciplinary cabal Object Collection, lays its figurative cards on the table in relatively short order. Not long into the work, presented in its premiere by the Incubator Arts Project at St. Mark’s Church in the East Village on Saturday night, a disjointed semblance of conversation takes place among three performers: Avi Glickstein, Daniel Allen Nelson and Fulya Peker. Lounging in a hotel room with a view of Manhattan visible through a window, they appear life size on a video screen that takes up half the stage.

“We start with the idea that a hotel is like a theater, and a theater is like a hotel,” Mr. Nelson says. “They are both places where life is simulated but also suspended. Nothing real happens in a hotel, and nothing real happens in a theater, and yet, in both locations, life looks like it is, or appears to be, taking place.” Hotel guests perform in front of their windows like actors on a stage, Mr. Nelson asserts, yet also peer through them like invisible theater spectators.

The same three performers are at work simultaneously on the other half of the stage, live and in the flesh: Mr. Glickstein dressed as a boxer, Mr. Nelson a cowboy and Ms. Peker as a femme fatale. Visible upstage in a loud shirt and feather boa, the composer Travis Just, a founder of Object Collection, conducts a small ensemble: Andie Springer on violin, Josh Lopes on electric guitar, Paula Matthusen on laptop computer, Devin Maxwell on drums.

As Mr. Just’s music murmurs, natters and erupts into spasmodic punk-metal hammering, Mr. Glickstein, Mr. Nelson and Ms. Peker embrace, dance, exchange wigs, blurt non sequiturs and repeatedly murder one another. Most of the dialogue is spoken, with sporadic singing and bursts of what might be termed shriekstemme; the music, despite its seeming randomness, hews uncannily to rising and falling tides of eventfulness.

The film proceeds unperturbed. As two bellmen, Eric Magnus and Tavish Miller, attend to the on-screen hotel guests, the real Mr. Magnus and Mr. Miller have glancing interactions with their corporeal counterparts.

What becomes increasingly evident is that the key to “No Hotel” — created by Mr. Just, the writer and director Kara Feely, the videographer Daniel Kötter and the set and costume designer Elisa Limberg — is right there in the title. What the audience sees is no hotel, but a simulacrum formed from expectations, media tropes and a few red herrings for good measure. The live performers are cinematic stock in dress and bearing. The opera is rife with evocations of and quotations from hotel-related films: “Grand Hotel,” “Psycho,” “Beware of a Holy Whore” and especially Andy Warhol’s “Chelsea Girls,” whose split-screen effect “No Hotel” emulates.

Halfway through this 70-minute show, a familiar iPhone ringtone heralds the work’s theatrical coup. On screen, Mr. Nelson takes the call. The caller is Mr. Nelson, onstage, who engages his doppelgänger in gently batty conversational Ping-Pong. “I am telling the truth,” Mr. Nelson softly sings. “I am not telling the truth,” he croons back in a complementary key.

From there, the component halves of “No Hotel” run in reverse. Mr. Magnus and Mr. Miller disassemble the on-screen hotel room and then reassemble it onstage. Lines once calmly declaimed now spill out hysterically; chaos and violence repeat. Still, here and throughout, the effect is one of self-conscious absurdity and affectionate play.

“We end with the idea that a hotel is like a theater, and a theater is like a hotel,” Mr. Nelson says, reaching the thesis anew. On screen, the boxer, cowboy and femme fatale repeatedly murder one another, blurt non sequiturs, exchange wigs, dance and embrace. You know what’s coming — and then it doesn’t. “No Hotel” may lay its figurative cards on the table in relatively short order — but they’re all jokers."